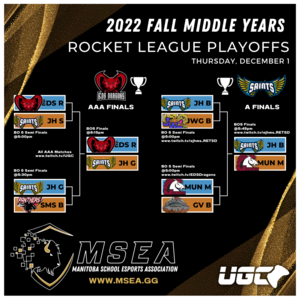 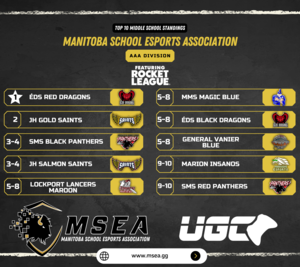 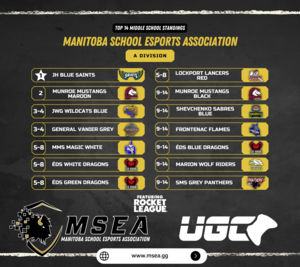 After going down 0-2 in a Best-of-5 series, the top-ranked Dragons battle back to capture the Manitoba Middle Years Title!
The ÉDS Red Dragons have been crowned the Manitoba School Esports Association Middle Years AAA Rocket League Champions!
The MSEA Middle Years hosted their third and fourth rounds of their playoffs on Thursday December 1st.  The team from Dugald began their night against the École John Henderson Middle School Salmon Saints.  The JH Salmon Saints managed to take a game in the Best-of-5 series, but the ÉDS Red Dragons were too powerful and dispatched the Salmon Saints to book their ticket to the finals where they would play the winner of Springfield Middle School Black Panthers and the John Henderson Gold Saints, the number 2 and 3 ranked teams from the regular season.
The SMS Black Panthers jumped to an early 2-0 game  lead over the JH Gold Saints, but the Saints pulled off a dominant display of goal scoring in the third game and SMS Black could not muster the ability to finish the series out, falling in a reverse sweep to the Saints, who moved on to meet the the Dragons with all of the momentum in the world.
The break between matches did not help the Dragons, as the Saints jumped out to an early lead in Game 1 and while ÉDS kept it close, the JH Gold Saints showed why they were the defending champions from last year.  They took Game 1 and then went out and dispatched the Dragons in Game 2 as well.  Facing elimination, the Dragons dug themselves into a DEEPER hole, going down 2-0 early in Game 3.  But with 3 minutes to play TurtleHollow and RichUnicycle combined for a LEGENDARY save, and turned around and combined with HeliosSpeed to score 3 goals in 30 seconds!  This seemed to take a lot of the air out of the proverbial tires of the Saints, and the Dragons never let  go of the momentum.  Taking Game 3, they put on a dominant performance to capture Game 4 and then Game 5 to capture the match and the title!
Watch the Video On Demand here: https://www.twitch.tv/videos/1667753568

Huge thanks to everyone that had a part in our success this year!  First to our entire coaching staff, Nathan Koblun, Jodi Craigen, and Ryan Hrabi who all had a huge part in coaching and supporting the students in their play this season.  Thanks to all the parents who helped out in setting up and tearing down esport competition days, who helped prepare suppers for students, and who supported their kids in competing.  Thanks to our IT staff here at Sunrise, Gord Tulloch, Jonathan DePiero, Josh Morrow, Kevin Lange, and Jody Thiessen who always have worked to support us in all that we do.  Thanks to Chris Gusberti for advocating for us and all of our trustees who came to see our competition space and our passion in person.  I know there are people I am forgetting to list here, but please understand that so many people are responsible for our success, and just to see them all here is overwhelming.  Thank you all from the bottom of our hearts, and share in our joy today!
Our Brawlhalla season will be heating up soon!  More info to come closer in January.